On top of the list with 7 wins, Alessandro Di Mattei. The winner of EGP in Rome in 2012, Michele Borassi, lost 2 games as did a lot of the other favourites. Three losses for Takuji Kashiwabara, the 2013 EGP Champion. Michele Borassi lost to Francesco Marconi (round 3)and to Arthur in round 6. Arthur Juigner lost to Marc Tastet in round 4 and to Alessandro Di Matei in round 7.
Not present at this edition of the 2014 EGP the two finalists of the 2014 Cambridge EGP, Nicky van den Biggelaar and Imre Leader. All together not so many foreign players at this tournament. Three frenchmen, Takuji Kashiwabara, Marc Tastet, Arthur Juigner and only one Dutch player, Martin Fransen. The australian player George Ortiz, he lives in Italy for so many years now, I count him as Italian player 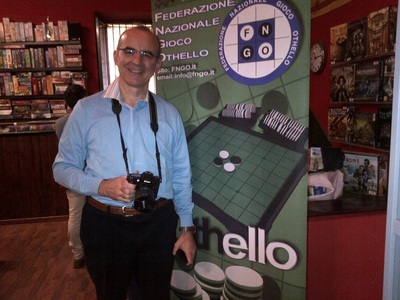 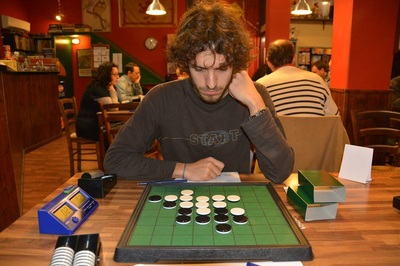 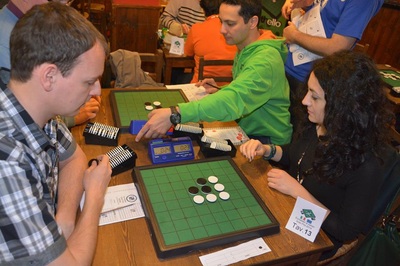 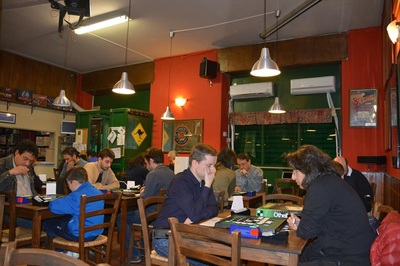 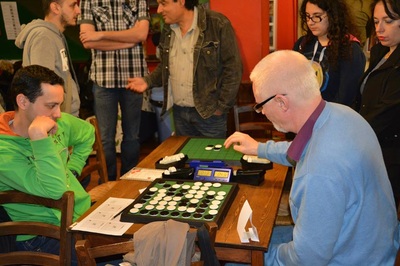 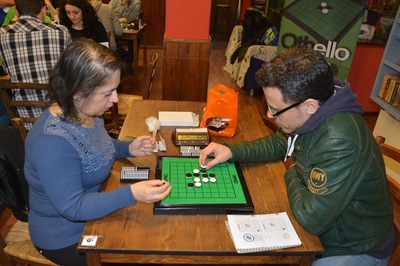 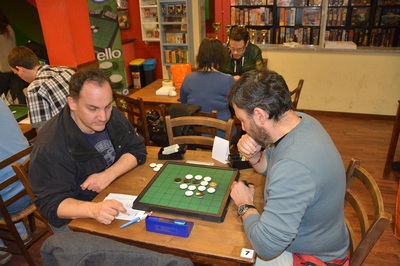 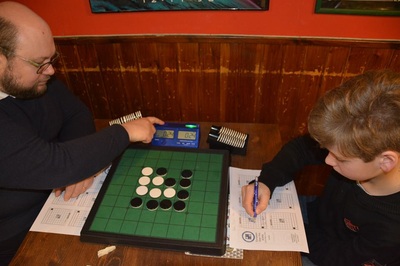 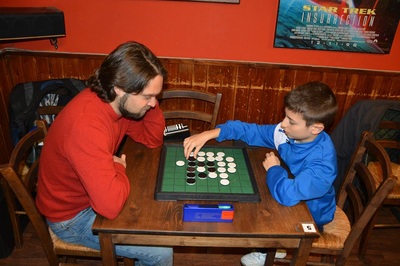 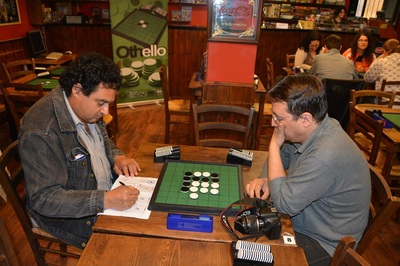 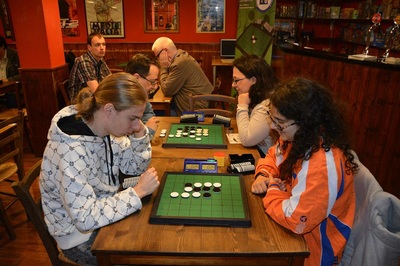 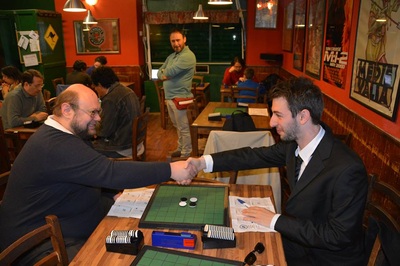 Alessandro Di Mattei lost 16 - 48 against Michele Borassi in round 8 and had 10 points after 11 rounds. Michele Borassi and Arthur Juigner both won 4 more games and finished equally with 9 points. A disappointment for Arthur, now age 12, that he failed to qualify for the final but he came back strong in the playoff for 3rd and 4th place. Arthur had won 35 - 29 against Takuji in round 10 and he defeated Takuji in the playoff  22 - 42. 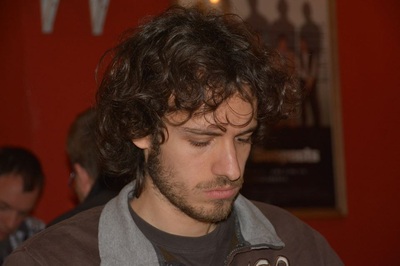 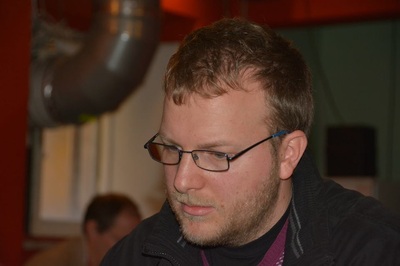 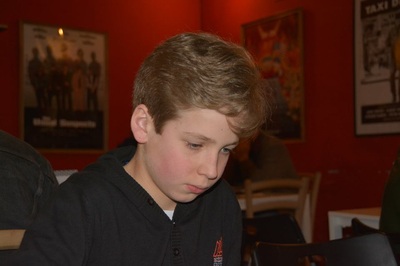 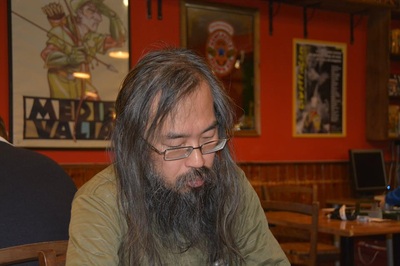 Takuji Kashiwabara (FRA) is one of the major Othello players in Europe. He won the European Grand Prix Championship 7 times. This EGP tourney in Rome was his 100th EGP tourney.  Reason enough for Othello news to have an interview with him, before tourney number 101 in Copenhagen. 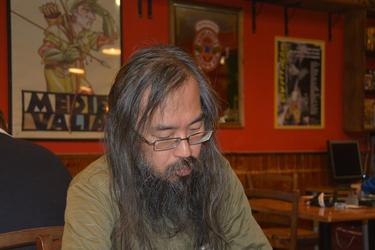 Takuji Kashiwabara at his 100th EGP tourney, Rome 2014
Takuji, when and how did you start to play Othello and when was your first EGP tourney?

I started playing othello as a child, which is nothing surprising for a Japanese. I started to play in competition in 1996 in France when I learned that there was such thing as a selection to French Championship in Lyon, a city which was just a little over an hour from my city by train. To my big surprise, I got qualified for the French Championship, and I think this qualification motivated me to play serious competitions.
My first EGP was Paris EGP in 1997, but of course, for me it was just another french tournament, although there were some international players. My first EGP outside France was Cambridge EGP in 1998.

You won the EGP 7 times. How many tourney victories and finals?

You can find the numbers in EGP statistic page (note: by Tom Schotte) of the wonderful website of Othello News...

Two difficult questions. The year when I made the most progress was indoubtedly 1999 : I won my first full-length tournament in France, my first international tournament, and got qualified for the World Championship for the first time (well at the time in France there were more players interested in playing at WOC than today, so it was not that easy). In terms of my overall performance over the year, it is really difficult to choose from 2001, 2002 and 2003. But if we are talking about my best performance in the WOC, it was 2005. In any case, that goes back too long time ago now.

The second question is also difficult to answer. There are number of victories of which I have been quite happy for different reasons. Basically you can be happy about your victory because you found a nice move that is not obvious, or because you trusted your intuition which turned out to be correct, or because you succeeded to plan really ahead, or because you learned something new (well this happens more often in games you lose than in games you win) during the game, or because you have had an occasion to apply a newly learned theory (or a theory that you knew for a long time but you hadn't had an occasion to apply up to then), or simply because the game had an important consequence, or maybe because the opponent was reputed to be strong. Now, I can find almost several games of which I am fond of in each category.

These three fit in more or less same category : I was in very difficult position, I had to think very hard to survive (actually during the game against Kitajima, somewhat I was optimistic), and when my opponents made the fatal error, I managed to stay calm and play the correct move in spite of the pressure I had. Well, you might be intrigued to see that I mention the pressure for a match for the 3rd place in an EGP tournament, but it happened to be the first game I played for a prize money... 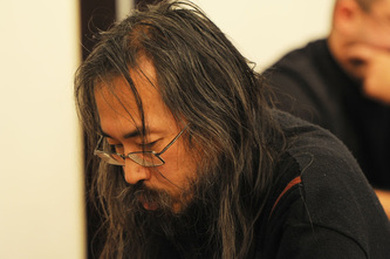 I played against Manu Caspard at the first round of my first French Championship! After the game we left the room, took a board and he commented my moves, without the transcript sheet ! Several years later I learned that in Japan almost any good player can produce the transcript without the board, but at the time this impressed me a lot. Anyhow, he won the French Championship that year. The year I started in European Grand Prix (outside France), he was the winner of European Grand Prix, winning all four tournaments in which he took part. So you see, he was an othellistic hero for me. I replayed many times his games, thinking over possible variations and refutations etc.

Is there 1 particular player in Europe that you find hard to beat?

If I keep playing like I did in Cambridge and Rome this year, lots of players will be hard to beat for me :( More seriously I think currently I am having a huge loss streak against Michele Borassi.

Is there 1 particular city that you like to go to for EGP?

Difficult question. I usually like Prague and Copenhagen as the tournaments there are very well organised, Cambridge because I love the city, Paris because it is easy to go (I used to like Milan, Torino, Genova and Bruxelles for the same reason but there is no longer EGP tournament in these cities). Of course, I shouldn't forget Gouda, Hoorn, Amstelveen, Krakow, Gdansk, Stockholm...

Last year there were only 5 players that took part in 4 or more of  the 2013 EGP tourneys. That is not a very solid base for such a  prestigeous titIe as European Othello Champion. Is there a future for the European Grand Prix? What can be done to attract more players?

Well, I am aware what I say is not very diplomatic, but in my opinion there are simply too many tournaments in places that are far away. There are now tournaments in Athens and Moscow. When I started, there were 5 tournaments with best 3 results that counted, which was very reasonable. I think it would be better to reduce the number of tournaments, but not by letting each country organize one tournament once in three years instead of once in two years. One thing we could do, is to distinguish "central" countries and "peripheral" countries and each country in the central zone organize a tournament once in two years whereas others do, for example, once in four years.

I am sure you are eager to win the 2014 EGP too. How many hours do  you spend studying Othello?

Not a lot this year. The results in the last two tournaments reflect this...

For the Othello rookies, is there a fast way to on the board succes?

Depending on what you call "fast". By dedicating ten hours a day to Othello, one will probably make seventy times as much progress as by spending an hour each week for Othello. Can we call it a fast progress?

Your best result at the WOC is a third place in 2005, Isn't it about  time that the 7x European champion also takes the World title?

As I said before, at the moment I can't spend enough time for Othello this year, so I certainly will not win the World title.

Thank you very much Takuji for the interview and good luck!!!