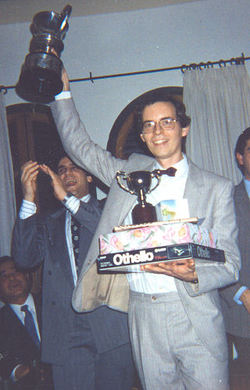 Marc Tastet World Champion 1992
Marc Tastet (FRA) was World Othello Champion in 1992. He won the French National Championship in 1991, 2004 and in 2008. Also winner of the European Grand Prix in 1993, 1994, 1995 and 1997. Eight EGP stage victories. EGP Madrid was Marc's 100th EGP tourney! Marc is a true Othello Champion, always willing to help other players and a very important source of information for Othello News. He enjoys the game and the friends and is one of the nicest players I have met. Victory or loss, who cares, as the french say..... ppppfffff

> Last year there were only 4 players who played in 4 or more EGP  stages and the year before that the score was 5. You are about to play in your 100th tourney. What drives you? How can we attract more players? Maybe change the EGP system? You have any ideas?

I think many players would like to join EGP tournaments, because it's always great fun to play EGP tournaments. I'm always happy to meet good friends that I have been meeting several times a year for many years and play very interesting games with them.

I heard some players say: OK, if I could go to EGP tournaments, I would win all of them easily, but I don't have time nor money to go to EGP tournaments. About time, I think you have to make choices: if you are really interested, you can find time to go to EGP tournaments. About money, it's not that expensive. Usually, I can find a return ticket by plane or by train for between 70 and 120 euros. Then, you can share a hotel room with other players, or even sometimes have free private accomodation at some players' home. As only the best 4 results are taken into account, if you are really strong, going to 4 tournaments or even 3 is enough to win the EGP. So why not have a try?

> So many different stages in the EGP, is there one, outside of France, that is your absolute favourite?

Many EGPs are very exciting. Maybe my favourite is Barcelone because I always win there. :-) But Prague is always great (and cheap). I also keep a very good souvenir of tournaments which were played on a site where everybody stayed to play, eat and sleep, like Oslo (Moss) 2011 or Netherlands (Texel island) 2014.

> You played your first otb tournament in 1984 and you won the WOC eight  years later in 1992. You have seen many players come and go. Who were your Othello heroes in those early years? Who left his/her mark on the Othello World? 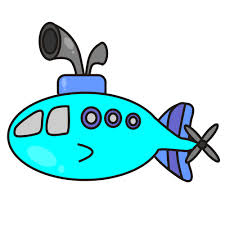 I guess Hideshi Tamenori is the player who most impressed me. I remember the WOC 1988 in Paris, when I was a table judge of a Murakami-Tamenori game. At some point, Tamenori thought for a while. Then he played a semi-forced sequence quickly and at the end of the sequence, he had a clearly winning position that I hadn't anticipated.
And Hideshi Tamenori left his mark on the Othello World, by winning the  WOC 7 times over a 20-year period.

> Former champions often reinvent themselves. You did not play in Bangkok last year, but at the Stockholm WOC in 2013 you came pretty  close to the semifinals and ended 5th place ex aequo with Ben Seeley. Is the EGP your idea of a WOC training session?

I didn't play in Bangkok because I never liked jet lag and it's not going to be better as I'm getting older. EGP is an interesting competition in itself. Of course, it can help training for the WOC but it's more than that.

> For those who never heard about it, please explain your "sous-marin"  strategy :)

There are some cases when it's good to have a bad start in a tournament to make a come-back in the end. This strategy is specially useful when you don't feel well on the Saturday and hope to feel better on the Sunday. It's important not to lose to too many top players on Saturday so as to be able to beat and overtake them on Sunday. You also need to have enough weak players in the tournament, so that you can beat them with large scores to have a good tie-break. The best situation is when there is a player who has won everything and you meet him at the last round when he is already sure to make it to the final. You beat him and get to play the final vs. him.

> Thanks Marc, good luck in the next tourneys! 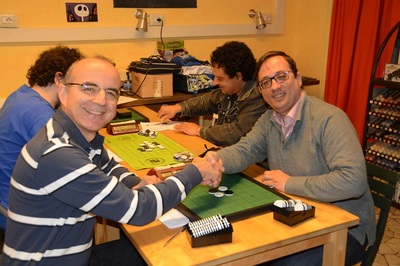 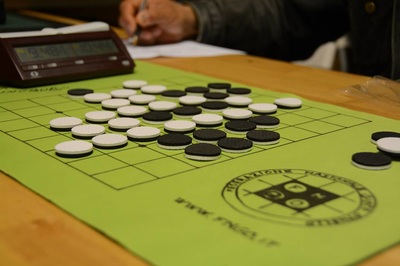 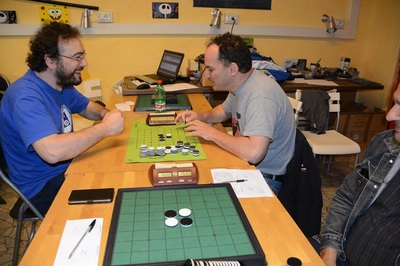 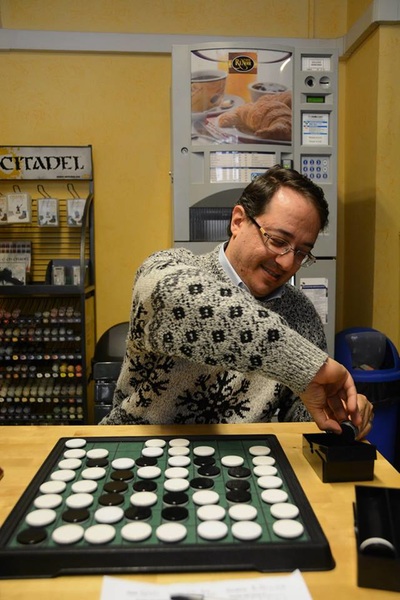 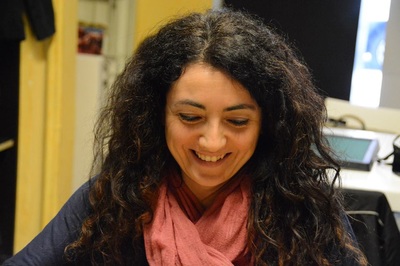 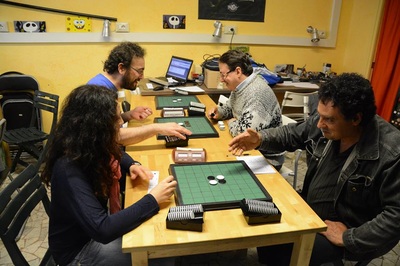 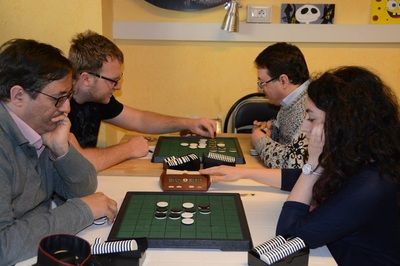 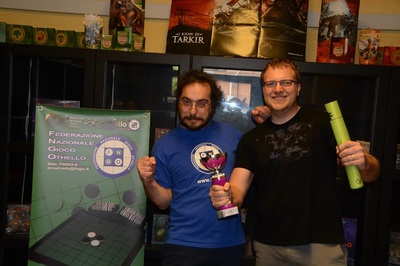 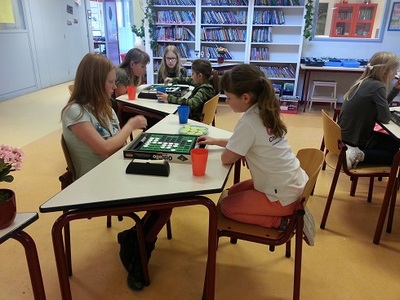 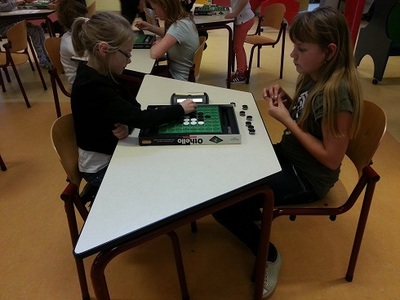 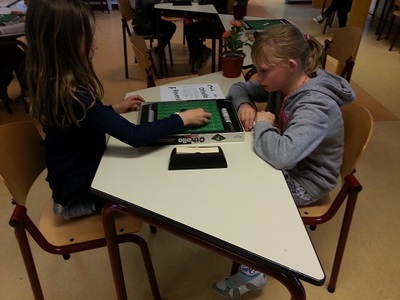 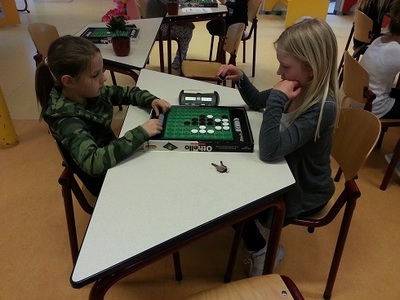 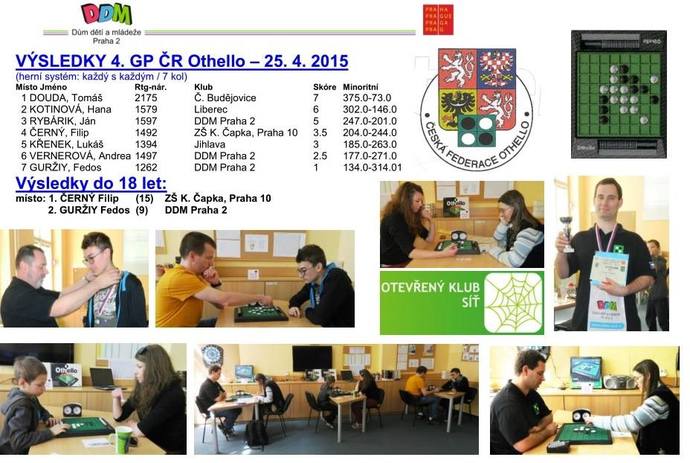 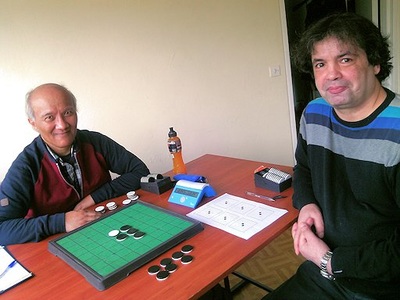 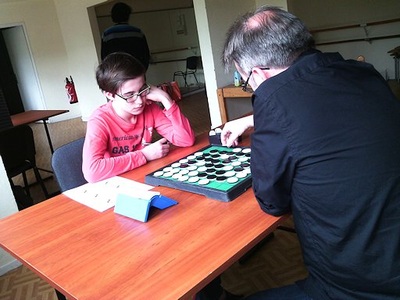 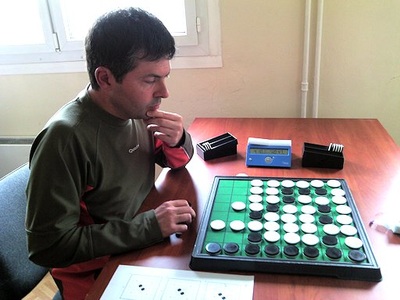 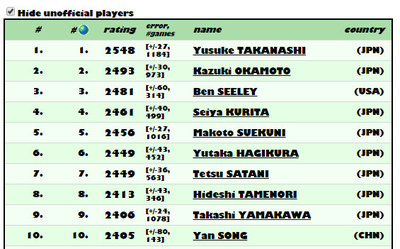 Top 10 on the World Othello Federation ratingist per April 16th. Use this link to check your own rating. 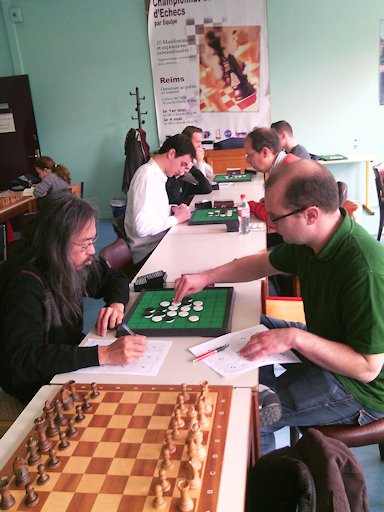 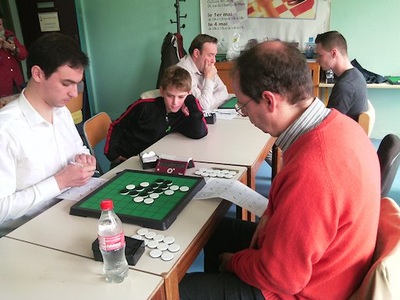 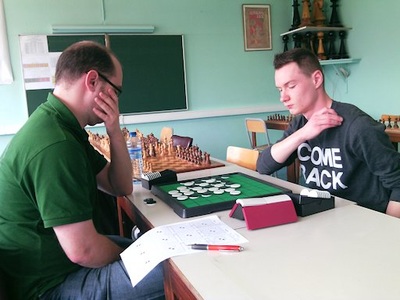 The games between Arnaud and Marc were broadcasted on LiveOthello.  Up to move 54 in the second game, I was sure there was going to be a third game, but Arnaud missed the winning move. Probably because he had very little time left on his clock.

The other semifinal was also completed in 2 games. Takuji Kashiwabara and Marc Tastet qualified for the final. Arnaud Delaunay forfeited the playoff as he was extremely tired, so Samuel Clinton finished 3rd and Arnaud Delaunay 4th. 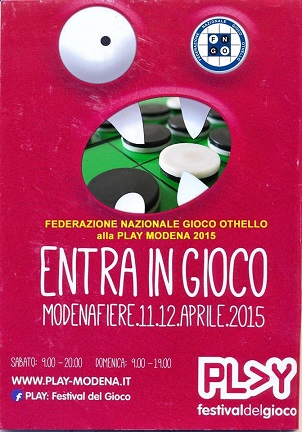 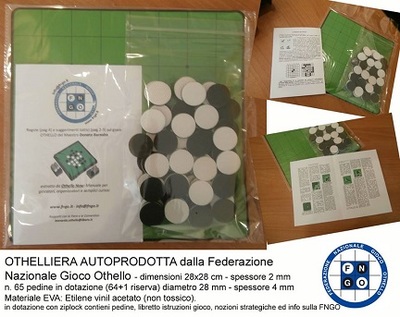 To all fans of Othello .. The Italian Othello Federation, the FNGO will be present this weekend at PLAY MODENA: the largest Italian convention dedicated to mind games. 'intelligent'. I find his friend Stefano Palermo in abstract chess together, to go, to checkers and other games. At the stand there will be boards for sale.
What a wonderful FNGO poster! Just had to show you :)

Othello demonstration at Toys 'R Us in Sendai 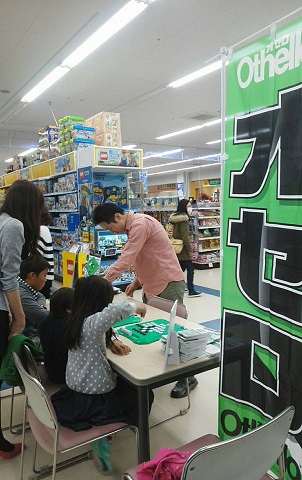 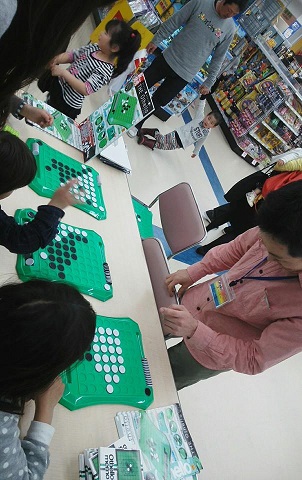 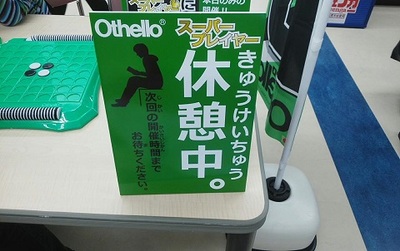 On April 5th, Takanori Oshimizu played simultaneous Othello games at the Toys 'R Us store in Sendai, Japan. None of his opponents managed to win a game, but they all greatly enjoyed the experience.

Want to know when and where next WOC will be held?

Bengt Steentoft send out this email concerning the next World Othello Championship. It seems that nothing much has been definitely decided yet. Look at the list of of past WOC's, my guess is London, Copenhagen or Madrid.